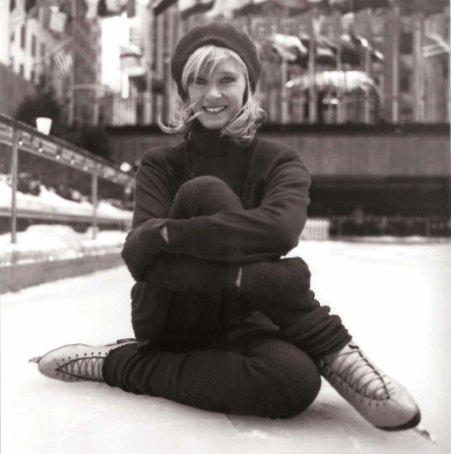 American figure skating champion JoJo Starbuck has enjoyed a multi-faceted career as an athlete and artist, producer, spokesperson and coach. Whether skating in the Olympics, starring on Broadway, producing world class events, or teaching adult skaters, JoJo brings integrity, enthusiasm and dedication to her work. With her childhood skating partner, Ken Shelley, JoJo made skating history in 1968 when they became the youngest pairs team America ever sent to the Olympic Games. That was followed by victories in the United States Pairs Championships in 1970, 1971 and 1972. They were the first Americans to break the Soviet domination in the Pairs event by winning the bronze medal at the World Championships in 1971 and 1972. The pair then returned to the Olympics in 1972 capturing 4th place. In 1994, JoJo and Ken were inducted into the United States Figure Skating Hall of Fame. JoJo Starbuck and Ken Shelley turned professional in 1972, headlining Ice Capades for four years. They appeared in scores of television specials in the U.S. and abroad. From 1977 through 1980, JoJo partnered with Olympic champion John Curry in his highly acclaimed Ice Dancing on Broadway, at New York’s Metropolitan Opera House and around the world. This gave JoJo the opportunity to work with world-renowned dance choreographers, strongly influencing her approach to ice choreography and production elements. Since 1986, JoJo has directed Starbuck & Company, a special events production group. From staging and directing shows for network television, to producing private party entertainment and corporate affairs, Starbuck and Company has custom tailored ice skating entertainment, promotional, and fund raising events.  From October 1993 through 1995, JoJo staged and choreographed Skates of Gold, the first international figure skating event with a cast of exclusively Olympic Gold Medalists. This television special aired on ABC and NBC.

JoJo has hosted and commentated for televised and live skating events. She has often been invited to be a motivational speaker about her experiences during her Olympic and professional career.

For over 15 years, JoJo produced the celebrated annual opening of The Rink at Rockefeller Center. For 3 decades she was the Head Pro and spokesperson for The Rink. Today JoJo’s focus is skating classes and private lessons for young elite and adult recreational skaters.

JoJo is currently serving as a board member for the breathtakingly beautiful skating company, ICE DANCE INTERNATIONAL. Aside from the world of skating, JoJo is an active supporter The Walter Hoving Home for Girls, World Vision, Compassion Intl. and Prison Fellowship. She has  performed in two feature films, and authored an autobiography. She and her husband, architect Jeff Gertler, raised their twin sons, Abraham & Noah, in Madison, New Jersey.

JoJo is currently a Mentor Mom through Renaissance Church and a member of the Garden Club of Madison.